The sheer magnitude of the evacuation of New Orleans can be masked by the way in which the evacuees are spread out over an enormous portion of the United States. The magnitude of the diaspora is only apparent when the local reports from the far-flung places those evacuees settled are consolidated onto a map: 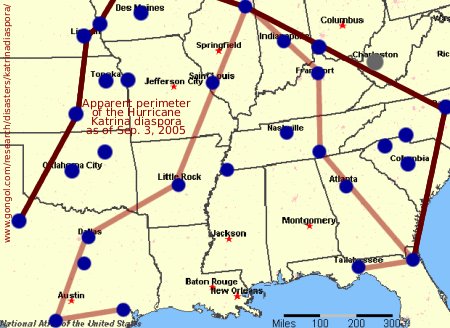 The diaspora expanded its perimeter into the weekend. By September 3rd, the following cities were reporting significant evacuee arrivals or were implementing plans to accommodate large numbers of displaced people:


Distribution of Evacuees By September 11, 2005

The approximate sum of the confirmed values above is about 416,000 people -- which, given the magnitude of the disaster and resulting diaspora, is probably the most reasonable estimate possible based on the available information.

The United States simply doesn't have a modern experience with a sudden, mass migration of this magnitude. While much of the immediate humanitarian response to Hurricane Katrina focuses on moving resources to the immediate area of the disaster, the migration of thousands of people to new locations on a semi-permanent basis is going to expose lots of important things about the nation's economy. Since we already know that a significant possibility of a serious terrorist attack on a major American city exists, the exodus from New Orleans and nearby parts of the Gulf Coast are essentially writing the book for next time. The importance of what we learn now shouldn't be underestimated.