Is Socialism Good for the Environment?
Brian Gongol


It is sometimes claimed that free markets inevitably corrupt and destroy the environment and that the only way to protect the natural environment is to adopt a socialist economy. However earnest, the argument is categorically wrong.

#1. Socialism Has Consistently Failed to Protect the Environment
The argument that "socialism protects the environment" ignores the titanic failure of the evidence. Many of the world's worst and most visible ecological failures happened under socialist, Marxist, or Communist governments. To wit: The Chernobyl nuclear disaster, the catastrophic air pollution of Eastern Europe's "Black Triangle," and the destruction of the Aral Sea each were specifically caused by socialism and took place under socialist government supervision.

#2. Socialism Ignores the Role of Property Rights
Market economies depend upon property rights; clear title to land, resources, and ideas makes it possible to efficiently and easily transfer goods and services between the people who create them and the people who want them. Property rights also make it possible to assign responsibility to individuals for the good and bad results of the things they create. A smokestack, for instance, belongs to someone -- whether a single individual or many individuals who together own a corporation which in turn owns the smokestack. If the smokestack bellows out pollution, private property rights make it very clear that the owners of the smokestack are also the "owners" of the pollution. Socialism suggests that the institution of private ownership is to blame for creating the pollution, rather than identifying that all productive activity creates some form of waste, regardless of the economic or political system in which it takes place. Campfire smoke, automobile exhaust, and even the waste heat generated by factory workers' bodies are all examples of pollutants that happen regardless of the economic system; market economies, though, insist that the ownership of those "pollutants" belongs to someone.

#3. Socialism Lacks the Market Feedback that Discourages Waste
Market economies rely on an infinitely complex system of signals and feedback that combine to form the intersection of supply and demand. One set of signals from the supply side is the cost of producing goods and services. Since a producer generally wants to make the most profit from the least amount of work at the lowest possible expense, it is to the producer's advantage to waste as little as possible. This is why paper companies plant new trees soon after they harvest forests and why trucking companies care about fuel efficiency. Under socialism, the feedback system is disrupted and distorted. 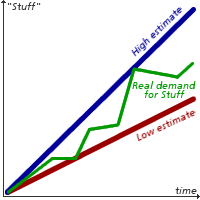 Socialism assumes that someone or some group of people has the ability to predict and plan for the needs of the many. This kind of omniscience is plainly impossible. Pretend, for instance, that everything that people might need or want can be lumped together in a single category, called "Stuff." In any given planning period, the planner must determine how much Stuff people will want and how much Stuff must be produced. But there will inevitably be some difference between what the planner expects supply and demand for Stuff to be and what actually emerges. Even if the planner is occasionally correct, every deviation from the actual demand for Stuff causes waste -- when too little Stuff is produced to meet demand, people needlessly suffer. When too much Stuff is produced to meet demand, all that extra Stuff represents waste. Even a really, really good planner will be unable to accurately predict the vast fluctuations in day-to-day demand for Stuff, leading to huge amounts of either waste or suffering. Yet this planning function is routinely achieved with great efficiency by the feedback systems of a market economy, in which freely-moving prices effectively tell everyone in the market whether too much or too little of anything is being produced.

#5. Socialism Doesn't Encourage the Production of Pollution-Reducing Technologies
Just as they offer signals about demand for every other good, market economies offer signals about the demand for pollution-reducing technologies. If people want cleaner air, markets reveal that preference by signalling demand for things like hybrid-fuel vehicles, wind power, and HEPA air filters. The market rewards those who can deliver clean-air technologies, since they profit from selling what people demand. Socialist economies, on the other hand, aren't known for rewarding those who create pollution-reducing technologies; China, for instance, is trying to curb pollution by mandate, but with limited success. Simultaneously, because the socialist government there can do whatever it wants, it is ejecting 1.2 million people from their homes in order to build a massive dam.

Socialism Isn't the Answer to Environmental Problems
Pollution is an inevitable byproduct of human activity; limiting the harm, however, is best done not by shutting down markets, but rather by fixing those occasional market-related problems with light government regulation or incentives. Rejecting market economies because of environmental problems not only throws the baby out with the bathwater, it ignores the plain fact that socialism and other alternatives to markets are categorical environmental failures in their own right.